The interior was processed as a comprehensive solution to the area of the central hall, including the design and co-ordination of the constructional changes that are a component of the overall construction project.

The solution’s basic concept is creating a solid pattern (arcades, cloisters), which edges the opposite façades of the hall and also continuing the rhythm and character of the existing pillars and pilasters. In the arcades that thus arise the basic functions of the hall are incorporated as are the entrance to the individual lifts.

A distinct element of the interior is the pharmacy building, which is the only one that protrudes from the arcade. The circular form and contrast were chosen as the best way to deal with a markedly bulky building, which thus becomes an original part of the space and is more like a kind of partner to the hall’s basic geometry.

Other components of the solution are both door spaces, which contain small shops selling flowers and newspapers. Likewise here a similar principle was used based on conserving and modifying the existing character of the distinctive pillars and lintels. 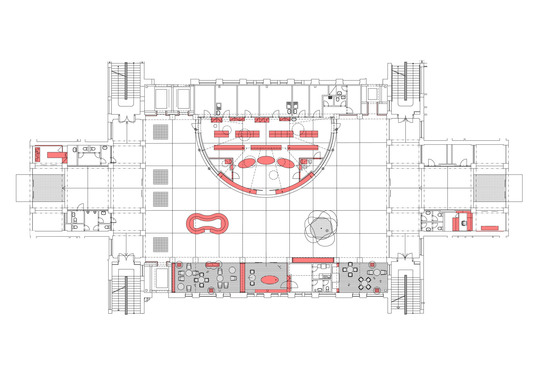