Finishing off parts of the ground and basement areas

The project deals with finishing off the basement and ground floor area, originally meant to be a sales space, but now conceived of as a multi-purpose space for rent. It can be said that the work is the result of a fight with the limits of the “dancing building”, which, however, often became an inspiration too.

The ground floor is dealt with as a large area with access from both the main reception and the exterior – from the riverside. The space is equipped with a “reception-do” bar, whose shape and orientation does not favour either of the entrances in particular. Another distinct element of the interior is the existing reinforced concrete pillars (a pillar represents a spatial form that invites creative discourse – one of the historical elements of historical architecture). This inspiration led to the proposal of coating the pillars in metal and the dynamic heads made of the stretched material Barrisol (the material’s perforation and translucence is also used for air off-take and lighting). The same material is also used for the entire ceiling. The somewhat irregular rhythm of the existing windows is unified by horizontal teak blinds and a sill covering the radiators.

The stairs have been inserted into a modified construction opening. The stairs are spiral made of cast aluminium steps, according to the architect Stanislav Fiala’s design, complemented with glass guards and a steel landing.

The basement contains a conference hall for fifty persons, separated by a sliding wall. The outdoor terrace is supplemented by an oak wall accentuating the separation of the terrace from the inner-block area.

We had some interesting experiences when thinking up the interior to the “dancing building”, which cover a lot of spatial-technical guile. It can be said that the work is a result of a conflict with these limits, however they were often a source of inspiration too. We do not want to describe or analyse this process as it would be long-winded and quite likely dull – the result is certainly far more interesting. 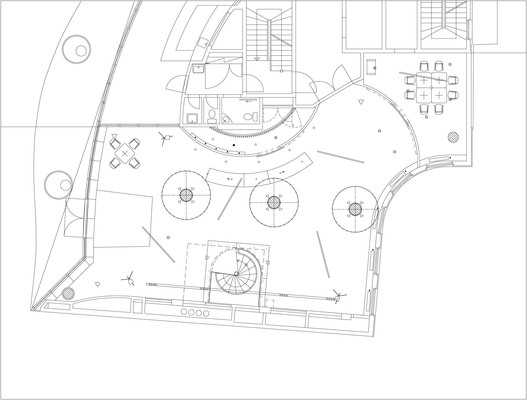