The given area of the square is already markedly defined by traffic organisation, underground garage elements and the dramatic architectural and sculptural decoration of the surrounding buildings.

The proposal attempts a sober harmonisation of the unsatisfactory state and also a solution that is easily understood.

The project was inspired by the ripples formed by a drop of water. A shallow stone fountain offering the opportunity to sit on its edges has been mounted on the object for air extraction. The rhythm of the water gradates to the surrounding grassed over areas, which little by little raises by increments and then falls in three decreasing waves to the edge of the footpath (the sloping surfaces invite one to sit on them).

On the embankment the diagonals intersect in the place where the existing statue from J. Mánes and the symmetrically installed statue of A. Dvořák stand. The edges of the grassed area are shaped by an organic curve formally connected to the line proposed for the square. 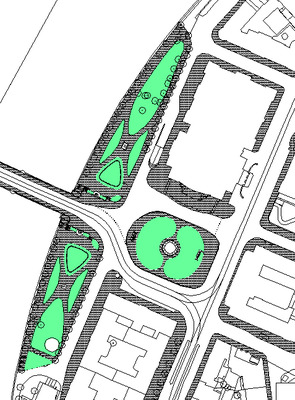