"Despise me not in comparison with the stone pyramids; for I surpass them all, as much as Jove surpasses the other gods. A pole was plunged into a lake, and the mud which clave thereto was gathered; and bricks were made of the mud, and so I was formed."
(inscription on the pyramid of Asychis – Herodotus, Historiae, II.136, 423 b.c. )

With the aid of archaeology, history, and its prelude in pre-history, becomes a continuation of the natural world, which abounds with living species and natural phenomena. Each of these entities has taken on the natural form that best suits its existence. Thus material culture predominantly corresponds to the environment: it is made up of measures created to satisfy needs invoked by climatic conditions.

There are moments when mankind, through its activities, touches upon the cosmic order of being. The pyramids in Giza are one of the remaining testimonies to such an act and since their completion they have constantly symbolised the eternal presence of Egyptian civilization.

To erect or build an object that incorporates within itself references to the past, as revealed by archaeological and literary records, in such a vicinity is a great challenge.

The response to the tender is partnership

THE SYMBOLISM OF THE ARCHITECTONIC CONCEPT

Whenever the river becomes full and makes the plains open sea, there grow in the water many lilies, which the Egyptians call “lotus” ( Herodotus, Historiae, II. 91 )

-Partnership of light and shade

The shapes of inverted pyramids cast extensive shadows on the plateau from which they grow. The angle of the shadow prevents the sun’s rays from making direct contact with the walls. At the same time the rays charge up the solar collectors on the extensive surface of the upper base line and the glass roof filters them to illuminate the object’s inner spaces.

The inverted pyramid, and its stone cladding made of local materials, corresponds to the shape of a stylised lotus or papyrus. In Egypt the lotus is remembered in connection with the creation, which has its beginnings in water. The lotus represented the divine might of the Nile, which gives mankind sustenance and is a guarantee of existence.

The building’s concept is based on three partly underground levels forming an extensive plateau that blends on the southern side with the terrain’s natural relief. Three inverted thematic pyramids rise from the plateau, supplemented by a fourth half sized pyramid containing the service and commercial areas, together with opportunities for specific expositions and events. The original sand quarry is used as the basis for creating the “pyramidal” lake, on one side geometrically formed by the shape of the plateau, on the other organically copying the natural terrain.

Around the lake there are thematic parks, leading from one to the other and freely tying in with the basic plateau of the permanent outdoor exposition. The proposal assumes extensive usage of small rest areas where visitors can find shade and water from a drinking fountain. 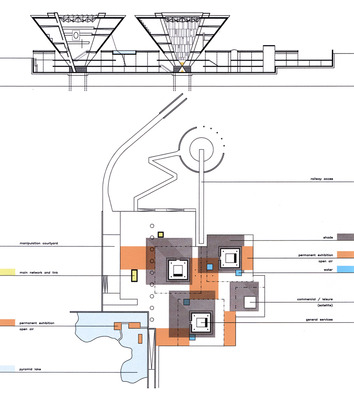 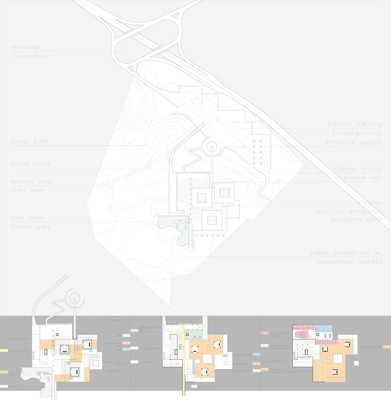