As a final farewell, we are attempting to perceive and present this profound event as a religious, social and philosophical situation, not a hopeless one. A sad, but natural part of life.

The mourning space should allow for a dignified farewell to the deceased, while not conceptually making the bereavement of the surviving family members unnecessarily intense and unbearable. It should shield the concentrated expression of mourning from disturbances emanating from the outside world, but at the same time maintain contact with the natural world. It should allow the bereaved to be immersed in sadness, but also allow for catharsis to help them overcome their grief. The surroundings must not be monumentally depressing, rather dignified. The place should have a pious but pleasant effect. Humanity should remain the scale. Death is an end in many ways, differing according to religious and cultural context. It is never, however, the absolute end. It is not a matter of desperation, but of hope.

The aim was to create not only a funeral hall as such, but rather a sacred complex with the widest possible range of funeral service concepts, including the possibility of an open-air service.

The architecture was based on the need to combine the convenience of openness of the public portion of the building with the entirely essential isolation of the private facilities. The building basically consists of four compact blocks defined by their functions and joined together by open public space. The ceremonial hall itself is more or less a representative sample of the principle of open space. It is located on the very border of the premises and the adjacent memorial gardens, which are separated from it by a body of water. The hall is strikingly glassed in on two sides, which provide the space with not only light, but also, in our view, with a desired link to the outside world. The effect is a spacious, airy interior with a slightly asymmetrical composition.

Apart from the requested building program, the premises have the addition of a separate chapel and a space for private meditation, which is located as a separate block in the southeast corner - in direct relation to the input portion.

The memorial gardens are directly connected to the building housing the funeral hall, thus allowing services to be held in the open air, or providing a place of gathering for the survivors before or after the ceremony. The gardens have three programs: the first consists of a gathering space for outdoor services, which are dominated by a massive red oak tree. The second program consists of the gardens themselves, consisting of cherry blossoms in a regular, slightly rhomboid-shaped grid. The third program consists of the dramatic skyline of the Czech Central Mountains. 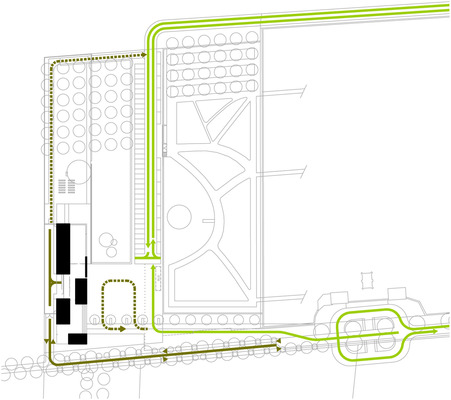 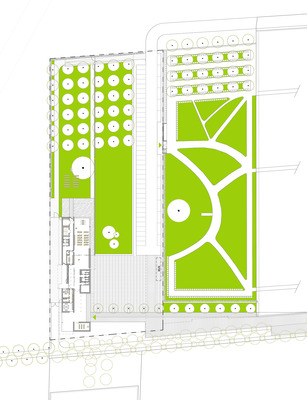