renovation and extension of the working settlements

The starting point of this concept is a thesis about preserving the original “image” of a locality, supplemented by new buildings that respond to the new and historical situation of urban development on Plzeňské Street.

The name of the settlement has not been accurately documented or explained. The literature often states that the settlement got its name from an estate vineyard of the same name, which has since disappeared. As it was in similar cases, the names of homesteads were often taken from the owner or from some significant feature of the location.

The Buďánka (Budianka) settlement was founded in the first half of the 19th century, sometime between 1820 -1840. The homestead of Zámečnice, no. 130, belongs to this location but, unlike the neighboring farms of Klikovka and Demartinka, also fails to appear on the map of 1813. The development here must have occurred all at once and during a very short period of time, because the cadastre map of 1840 shows the ground plans for most of the homes drawn up. The exact outer appearance of these structures is unknown, but their ground plans probably remained unchanged with the exception of minor additions during the course of later history. We can also surmise from this that the foundations of the buildings that survived, in most cases until 2002, were constructed between 1820-1840.

The area can be divided into two parts:

1_part restoration, reconstruction, replacement and completing the original buildings (commemoration) The value of this group of homes consists mainly in a certain randomness, irregularity and outlandishness, and its importance is best expressed as a whole. For this reason, we propose building part of the replaceable structures close to their original form, because the value of this randomness cannot be created artificially.

When thinking about urbanism, it appears that the size and configuration of the original buildings are actually the best, in that they represent years of established development. It is necessary, however, to ensure the maximum availability of entrances and parking for cars among these buildings while still maintaining the original characteristics of the location. It is also necessary to update the living quarters to current standards, as the flooring space in these houses is quite minimal.

Three groups of shared basement spaces have been proposed with enclosed garages containing a staircase leading directly to the renovated houses, along with free garage parking spaces for a number of houses that cannot be connected to the common garage.

These basements will exit partly above ground, evoking the original system of diverse (pauperized) supporting walls and small structures, which often follow the floor plan. These semi-basement spaces are used for the most part for connecting the above-mentioned living areas.

The actual dwellings of these restored structures mostly contain two to three bedrooms with a bathroom and because the building is often quite narrow, the space in the loft is basically unusable. We propose retaining them as traditionally accessible lofts without thermal insulation, thus ensuring proper aeration of the loft, which in itself provides thermal insulation against the summer heat. This also eliminates, inter alia, the difficult task of adding roof windows and the likely need for air conditioning. The originality of the rooftops will therefore remain preserved.

The decision to open Motolské Creek gives the configuration of the new buildings a clear, strictly-defined sense of urbanism, but also fits well into the landscape: a part of the two structures nestles up to the original location and slope (behind the creek) and the structure on Plzeňské runs along the line of the street.

The size and, to a certain extent, shape of the new construction is therefore demarcated by the creek, route of the street, and distance of the original houses. The new buildings allow for a two-meter projection over the surface of the creek and sidewalk along Plzeňské. 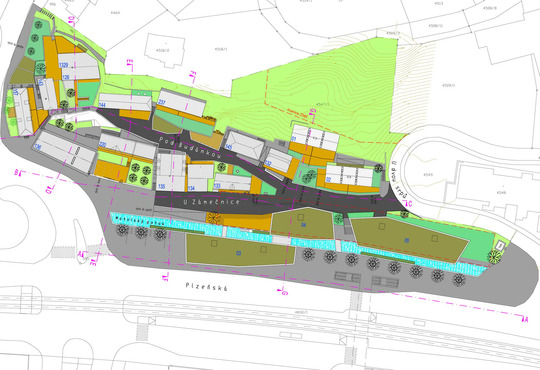 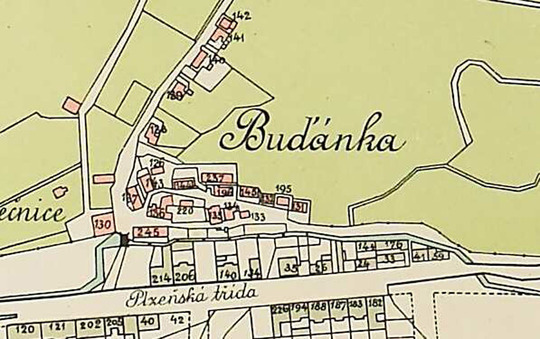 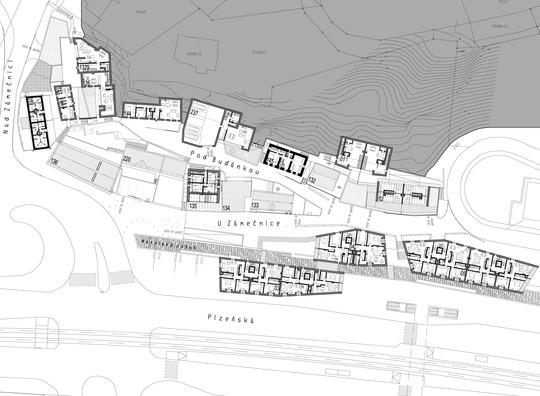 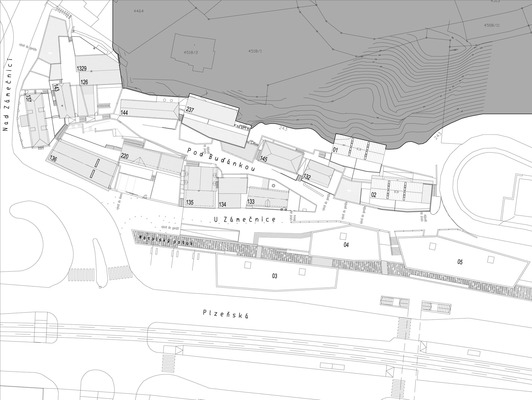